The first Buddhist temples of Mongolia were built during the period of the Huns that began in the 3rd century BC. From year 330 to year 550, during the period of the Nirun, Buddhism was the state religion and more than ten kings received honorary Buddhist titles. Yet Mongolian people were non-practising, they went on following the old shamanic practices. Buddhism became for the second time the state religion after the fall of the Yuan Dynasty, when Kubilai Khan made Lama Pagva the spiritual leader of the country. But shamanism remained the most popular religion.

In the 16th century, Buddhism became again the state religion of Mongolia, for the third time. In 1587, Altan Khaan first gave the title of Dalai Lama, meaning "ocean of wisdom", to Sodnomjamts who was the leader of the "yellow sect" of Tibetan Buddhism. Yet it's only from the 19th century that Mongolian people really practised Buddhism.

The development of Buddhism reached its highest point at the end of the 19th century and the early 20th. With the help of Manchus, more than 700 monasteries have been built across the country, welcoming more than 30.000 lamas. Manchus aimed to incite the development of Buddhism in Mongolia, partly in order to annihilate the local cultures, partly to minimise the potential political oppositions to their system, making sure that the monasteries had taken on men. In the early 20th century, there were 115.000 lamas in Mongolia, that is to say 20 % of the population and more than 35 % of the men of the country. The young boys were typically inscribed in a monastery from age five or six, and were brought up under the tutelage of old lamas.

In 1911, Mongolia became an independent religious state ruled by the eighth Bogd Khan. But after the popular revolution of 1921, Buddhism began to decline, and in the 1930's and 1940's, the government made destroy almost the whole of the Mongolian monasteries in order to abolish the state religion. 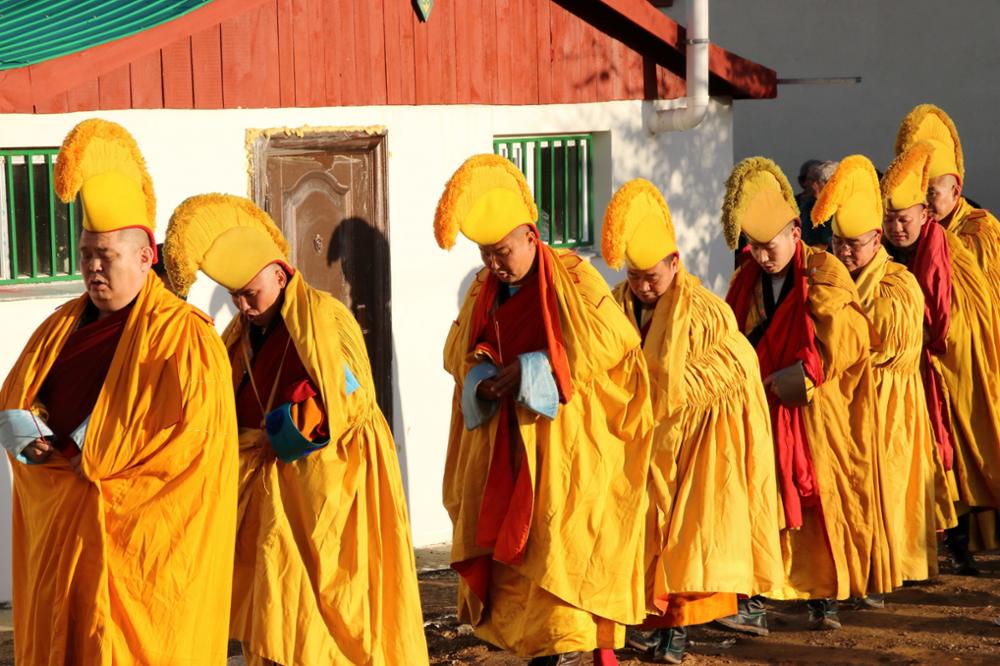 The ritual and mystical practices of Tantra influenced a lot the Buddhism practised in Mongolia, especially with the belief in the supernatural power of sacred words. This belief materializes in books or printed flags, and mantras recited. According to the Buddhism Yellow Sect, the book is the most sacred object. It's the source of wisdom that helps the Man to escape from his pain. In case of illness or tragedy, and during the periods indicated by astrology, Mongolians consider appropriate to read, or to make lamas read, a special text. It's not the whole book that must be read, but only the dharani, series of texts and magical syllables that contain the essence of the book. Each family thinks that it's a good omen to be in possession of a religious sutra, folded in a fabric and kept in the back of the yurt. Only a lama is allowed to touch it. It's never read in its current form, but kept as a symbol of its contents; the contents have an influence, whether it be read or not.

Mongolian people believe that placing a prayer flag (khiimoriin dartsag) on a post back in the yurt will bring help in their daily life. The words written on the flag are supposed to be stimulated by the unbroken breath of wind. Prayers can also be stimulated by putting a book to one's head, or by turning a prayer wheel, cylindrical device containing hundreds of prayers.