Young Women Interest in Eagle Hunting is Increasing in Mongolia

A new wind is blowing on the traditional eagle hunting rituals of the Kazakh nomads of the Altai. Recently, young women have been interested in getting ready for this ancestral activity that was exclusively for men.

We had already mentioned the incredible story of Aisholpan, a 13-year-old girl that became the first woman winner of the eagle hunting competition in Mongolia, which earned her a dedicated documentary: The girl and her eagle. The courage and strength of this girl are no longer unique as eagle hunting festivals now have more and more young woman participants.

Eagle hunting, a tradition handed down from father to son.

Eagle hunting is a 2,000-year-old tradition that is transmitted from father to son in nomadic Kazakh families. The eagles have become sacred animals for these nomads and the taming and training of this raptor are seen as a rite of passage to adulthood. Under Kazakh yurts, it is common to count as many eagles as teenagers.

Hunting is a difficult or even dangerous practice at times because of dangerous prey such as the wolf or lynx that can be hunted. Teenagers usually practice under the eyes of their elders, who supervise the hunt and continue teaching.

Man and animal become tamed during these teachings and will eventually develop a strong and intimate bond.

The women in Mongolia are important in society. Families are often proud to present their daughter as a strong woman, a woman capable of being equal to men. To keep the Kazakh nomadic tradition, eagle hunting was opened to young women.

It should not be denied that allowing teenage girls to participate in eagle hunting festivals can bring money back to those families who today are suffering a lot from global warming and who are consequently becoming poorer. Many of them must have in mind the example of Aisholpan, who has become a star in the community and can now study in a private school. 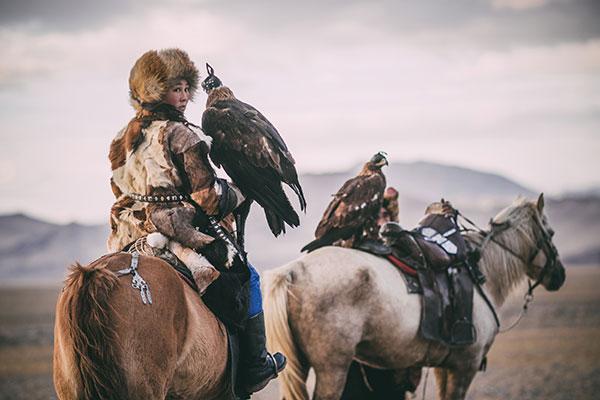 There’s always more girls at eagle hunting festivals. These events, including the best known in Olgii, were often created to attract travelers to these remote areas and motivating Kazakhs to continue the tradition. They find a certain pride to present their raptor and test their ability to an audience.

At the Olgii Festival, there are nearly 300 hunters from all over the country. Some courses even more than 30 km on horseback carrying their eagle 6 kg.

Since 2014, more and more teenage girls are participating in the festivals. The first to win the tournament is, of course, Aisholpan Nurgaiv, who was 13 at the time. In 2017, another girl, 13-year-old Zamanbol Matai, also won the battle against dozens of male hunters experienced in the discipline. It seems that the sweetness of girls and their relationship can be more maternal with their animal is a winning combination.