Landlocked between the Chinese and Russian giants, Mongolia is a special country. It recalls the times when the Mongolians were feared because of their extraordinary skill at fight (let’s remember that they created the largest empire the humanity has known). But these times are in the past.

Today Genghis Khan’s vast empire doesn’t exist anymore, but the country remains large: about twelve times the size of England or two times and a half the size of Texas. Its varied landscape is composed of mountains, hilly plateaux, and desert areas. Globally, the ground goes down from Northern and Western Altai high mountains to reach the plains and depressions at East and South. Mount Khuiten, which is located in the Altai area, at West, reaches 4373 meters (2,72 miles) at its highest point.

The lowest point is in the oriental plain and reaches 560 meters (0,35 mile). The country has one of the biggest freshwater lakes of Asia (Lake Khovsgol), many salt-water lakes, marshes, sand dunes, meadows, alpine forests, and permanent glaciers. North and West of Mongolia are seismically actives areas, so we can find here many thermal springs and volcanoes. Mongolia has three big mountain ranges: the Altai at West, the Khangai in the centre, and the Khentii along the Russian frontier, in the Northeast of Ulan Bator. A great part of oriental Mongolia is composed of vast plains, whose lowest part is composed of a depression extended from Southeast to Northeast, from Gobi Desert to Eastern Chinese frontier.

The principal rivers of the country are the Selenge and the Moron, that both flow into Lake Baikal. Other rivers in South and Southeast don’t reach the sea, but flow into salt-water lakes or disappear in the desert. 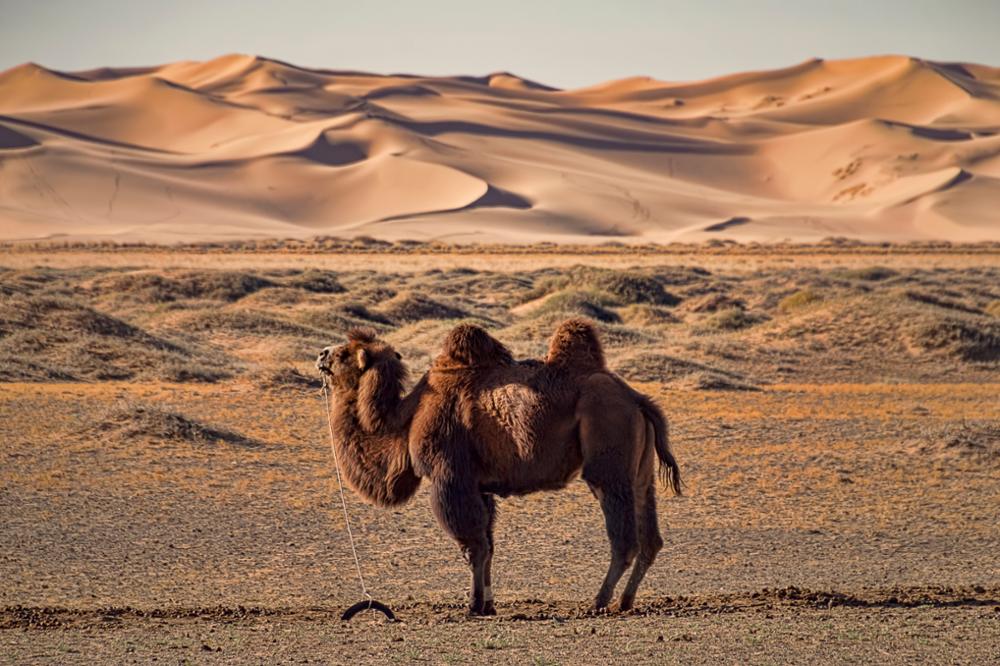 The name “Gobi” is a Mongolian word referring to a desert steppe, an arid area. Gobi desert stretches out over more than 1600 kilometres (994,19 miles) from Southeast to Northeast and over 800 kilometres (497,10 miles) from North to South. It’s one of the largest deserts in the world. Contrary to images often linked with the desert, a big part of the Gobi is not composed of sand, but is full of rocks. Mongolia houses many species, sometimes rare on a worldwide scale. More than 3000 species of vascular plants, 93 of lichens, 437 of mosses, 875 of mushrooms and many types of seaweed have been registered. Mongolia’s flora comprises about 150 endemic plants and 100 old species. More than 100 types of plants are registered as rare plants.

It seems that a large part of the actual alpine flora comes from the far central Asia. The queen species of the steppe is the wormwood, and its king could be the saxaul in the Gobi. We can also find many species, such as the edelweiss, columbine, matricaria, turk’s cap lily, erythronium, peony, white dryad, globe-flower, pasque flower, gentian, ranunculus…

Wildlife is extremely rich in Mongolia: about 136 species of mammals, 436 of birds, 8 of amphibias, 22 of reptiles, 75 of fish, and many invertebrates. Among this fauna, we can mention the onager, Gobi bear, snow leopard, saiga antelope, Przewalski’s horse, Bactrian camel, wolf… There are also many birds, notably vultures, eagles, cranes, etc. We can also mention small mammals such as the desert hedgehog, marmot, and little rodents such as the pika, or suslik.