The 10 must-see monuments in Ulan Bator

Ulan Bator is a great city with a rich history of 376 years. Wherever you go, you will encounter some beautiful old and new buildings or monuments that represent icons of the city. 79 buildings are registered and protected by the capital administration to date. In the 21st Century, Ulan Bator shines with preserved historical monuments and modern or recent architectures. Here are the most interesting of them, in our top 10 must-see. 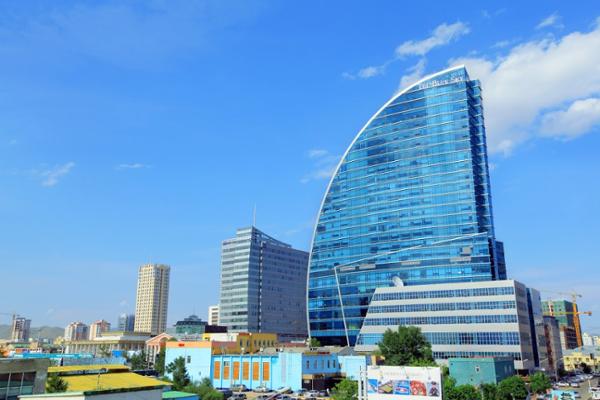 The Blue Sky Tower is located at the heart of Ulan Bator, the capital city of Mongolia. As high as 105 meters for 25 floors, this tower is one of the main buildings having a direct view on the Genghis Khan’s square at the center of the city. This iconic building made of glass and steel is easily recognized with its shape like a leaf and with its light blue color, displaying incredible design and modernity. Built in 2009, this tower incorporates appartments, office rooms and floors, restaurants, a parking lot, a conference hall and one hotel named after it. The Blue Sky hotel brings the best view over Ulan Bator, with its 200 rooms rooms and 12 suites located at the lasts floors of the building, for luxious and confortable stay in the capital city. The restaurant is definitely a must see, with its breathtaking view on the city. 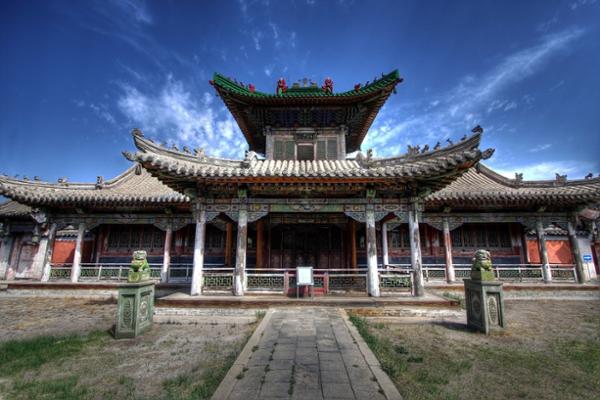 The Bogd Khan Palace is one of the most important historical location in Mongolia. Built between 1893 and 1903, 2 main parts form the current place : - a summer palace includes 7 temples and pagodas, is a beautiful tribute to the chinese style architecture of the period. Both historical and cultural, this complex is very well preserved today in the capital city. - a winter palace, a two floors building, erected by Russian architects with a European style. For about 20 years, the winter palace served as a second residency for the 8th Buddhist leader of Mongolia Bogdo Javzandamba Agyaanluvsan and his wife Dondogdulam. The door of the main temple is dedicated to the 8th Bogdo, leader of both the State and the Religion of the country. The Palace is the last remaining residential location where the Bogd Khan lived, out of 4 different places. The Palace has become property of the State since 1924, restored in 1961 and transformed into a museum since 1974 under the name of Bogd Khan. The Winter Palace is located at about 1,5km south from the Gengis Khan square. From the square, you can go directly straight from the south street, passing along the Bayanagol hotel and crossing the Peace bridge until reaching the crossing between continuing striaght to the Zaisan monument (south of the capital city) and the road to the airport  going west.

The State Academic Drama Theater was established in 1931 as the State Central Theater, in a building which no longer exists called "Bombogor Nogoon." It has been replaced by the one found beside the Parliament on Genghis Khan Square. This Theater is funded by the Mongolian State and participate to many cultural event yearly and displays very often international classics and Mongolian ones. It is the first place where Mongolian artists and comedians would have started in the early 1930ies before reaching international recognition through many countries. Today, Shakespeare, Sophocles or Mongolian plays are taking place and contribute to the richness of the Mongolian culture and repertoire. A pleasure both for the ears and for the eyes too! 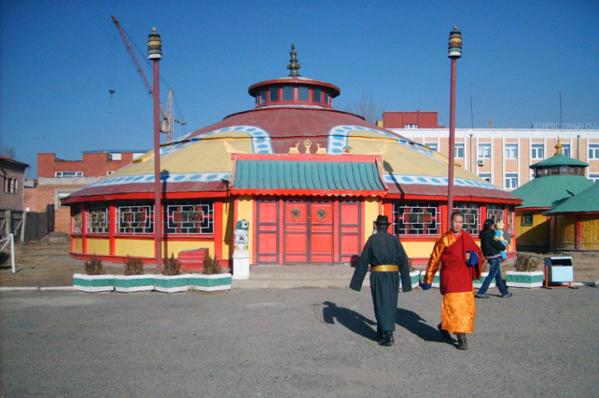 This monument is one of the 3 remaining monasteries of its type in Mongolia. Originally built on another location in 1890, it used to be an important religious place in Ulaanbaatar, with a capacity of 100 to 600 lamas or monks inside of its walls, this monastery stopped its activity and has been destroyed in 1938 under governmental pressure. It is now located in the Sukhbaatar district, 8th subdistrict, very close to the Embassy of China, and near Baga toiruu street from where you can see the colorful roofs of the monastery. It is definitely a peaceful place to have rest. 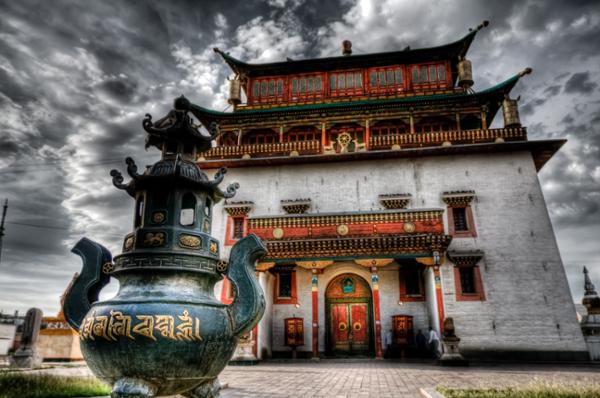 The Gandan monastery is the biggest and most luxurious monastery in Ulan Bator. His Tibetan name means “Place of great joy”. Built in 1810 and partially destroyed, it has been restored in 1990. Famous for beautiful decorations, it size and having the biggest standing Buddha in Asia (26 meters high), Megjid-Janraiseg the bodhisattva, guiding men to the path on their truth with his wisdom and compassion. Truly beautiful, colorful and the most visited monastery in the city. 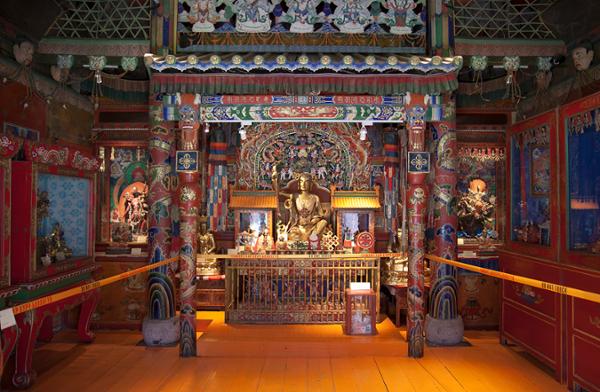 The Choijin Lama temple known as a Religion museum in Ulan Bator, is a complex made of 5 different temples built between 1904 and 1908. This place is dedicated to honor Choijin Lama Luvsankhaidav, young brother of the 8th Bogdo Khan, the spiritual leader of Mongolia. Considered as one of the most beautiful monasteries in Mongolia, it also stopped to be a spiritual location since 1938 because of the Mongolian communist party. Instead, it became an historical museum, displaying collections about old feudal beliefs. Since then, no more religious activity has been reintroduced into the temple. 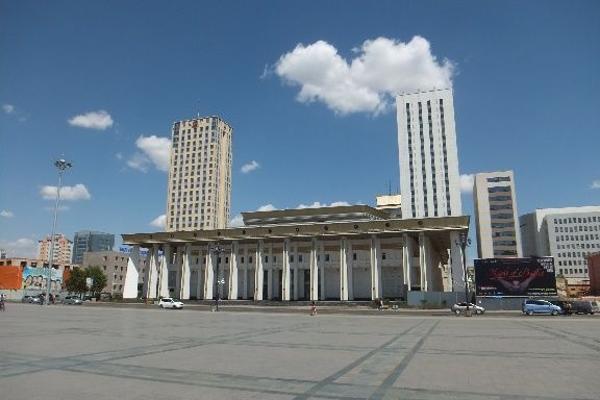 Offered by the soviet government of Russian in 1987, this large building is divided in 4 wings A, B, C and D, and integrating various artistic halls : the National gallery of art, the museum of Mongolian Theater, and the National Philharmonic Hall. Number of beautiful musical concerts including the traditional instrument Moriin Khuur (horsehead fiddle) are given throughout the year, on a scene that can gather more than 100 artists. 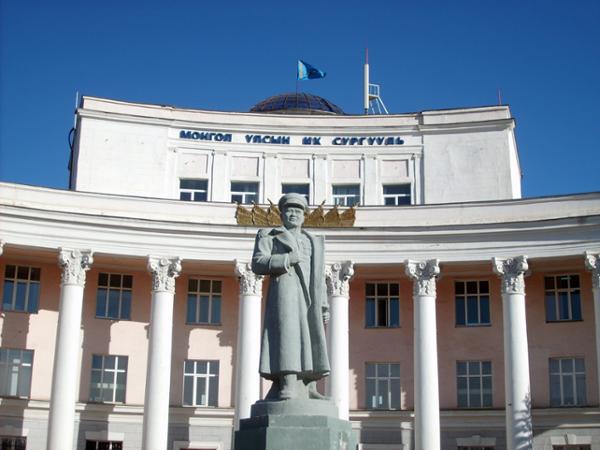 Started in 1943 with a typical soviet era architecture by a Russian artist N.M. Shchepetil'nikov and finalized in 1947, the Mongolian National University is a beautiful complex located at the East of the city Ulan Bator. Also famous for having used the workforce of 700 japanese prisoners at the end world war 2 for its construction achievement. A piece of history on its own! 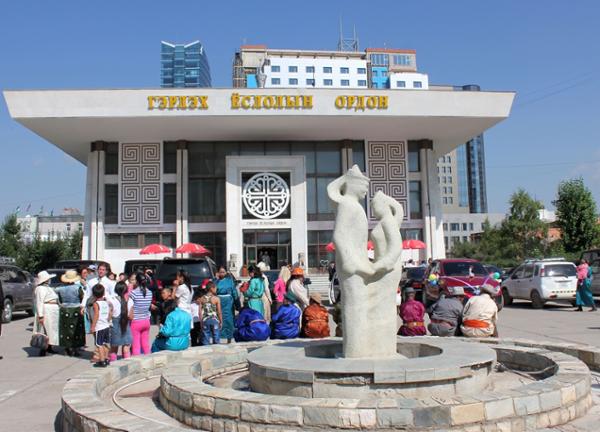 With a unique design, this iconic building erected in 1976 by Russian founds is an emblem for hundreds of maried young couples in Mongolia. The beautifully decorated entrance is the result of the work of the Mongolian artist D.Amgalan (1933-2008), and crafted by the students of the Fine Art School of Mongolia. 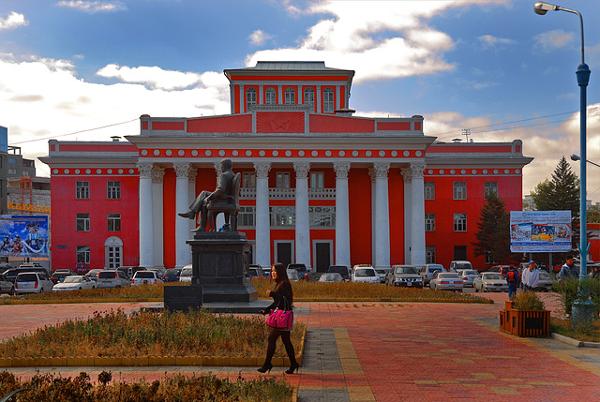 Opened in 1963 playing the famous Tchaikovsky’s opera Eugene Onegin, the National and Opera Ballet Theater, also called Ulaanbaatar Opera House, is the salmon-pinkish building on the southeast corner of Chinggis Khaan Sq. On Saturday and Sunday evenings throughout the year, and sometimes also on weekend afternoons in the summer, the theatre holds stirring opera (in Mongolian) and ballet shows.   That's it! Let us know what you think of these batiments and monuments that make this city so beautiful!

Tips and TricksTourism
Gaelle
15 June 2020
Hi, We are planning a trip with the trans-mongalian to Ulan Bator, we are planning to stay 2 days as we have the trans siberian to catch- whats good to see in Ulan Bator and the surrounding in December? Thanks Gaelle
Skura Gaelle
16 June 2020
Hi thank you for this info. Even in December is that ok? What s the temperature usually in Dec?
Laura MYOTTE

15 June 2020
Hello Gaëlle, If you have 2 days there, I would advice to leave directly to Terelj national park upon your arrival in Oulan bator. There you could visit Aryaval monastery, turtle rock then stay overnight with a nomade family. 2nd day, back to Ulan bator. On your way back you can visit Gengis Khan statue. Once on Oulan bator, you can visit Gandan monastery and if they are opened this day : History museum and / or Bogd Khan palace.
Reply
Related articles
Experiences for people over 60
Things to Do at the Genghis Khan Equestrian Statue.
The Main Festivals in Mongolia
The Mongolian Language
The 10 Main Monasteries in Mongolia
Archives
Tags
Tourism (35)Culture and Tradition (26)Tips and Tricks (20)History (8)Flora and Fauna (5)People and Ethnicities (5)mongolia (4)adventure (3)explore (3)festivals (3)going to mongolia (3)Gastronomy (2)Languages (2)News (2)Religion (2)things to do (2)airlines (1)altai (1)dukhans (1)eagles (1)kazakh (1)naadam (1)reindeer (1)shamanism (1)shamans (1)Society (1)taiga (1)tsatsaans (1)