2000 BC: breeding develops in Mongolia

400 BC: Chinese people starts to build the Great Wall to protect themselves from any incursion of the Xiongnus, main enemies of China

360: end of the Xianbei Empire

386 – 533: period of the Wei Dynasty, established by the Tuoba in North China

916: beginning of the reign of Kitans, established beyond East Mongolia, Manchuria and North China

1206: Genghis Khan proclaims himself leader of the Mongol Empire and begins to found his empire

1215: Beijing is defeated and becomes Mongolian

1235: Kharkhorin becomes the capital of the Mongol Empire. Marco Polo arrives in Kharkhorin right at that time.

1236 – 1240: period of offensives against Russia by Genghis Khan’s grandson, Bat Khan, and his Golden Horde

1246: Guyuk, Ogodei’s son, is proclaimed Khan and subdues Tibet. He dies this year.

1247: Mongolia has its first census

1254: William of Rubruck arrives in Kharkhorin, Franciscan monk sent by the King Louis IX of France

1264: the capital is moved to Beijing

1271: Khubilai Khan changes the name of his empire into “Yuan”

1279: Khubilai Khan achieves the conquest of the Chinese territory unifying China in his own empire. He founds the Yuan Dynasty overthrowing the Song Dynasty of South

1333: Togoontomor, last Khan of the Mongol Empire, seizes control on the Yuan Empire

1368: Mongols lose the Chinese territory. The Yuan Dynasty collapses and is replaced by the Ming Dynasty 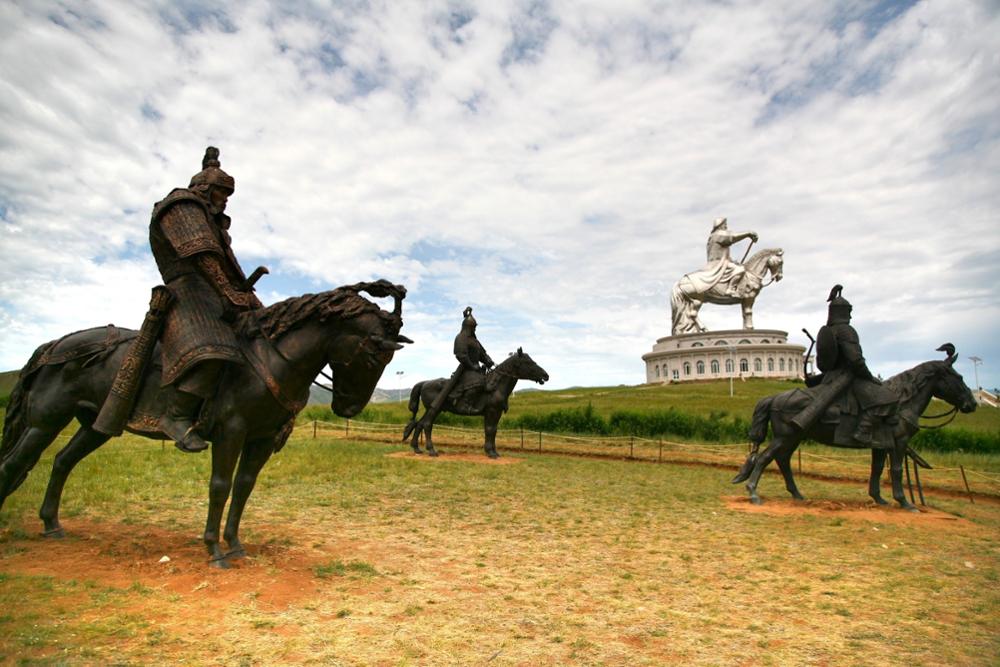 Fall of the Empire, domination of Manchus

1578: Mongols convert to Tibetan Buddhism under Altan Khan’s reign. He gives the title of Dalai Lama to Sonam Gyatso.

1589: the construction of the first monastery of Mongolia begins: Erdene Zuu Monastery.

1641: Zanabazar is proclaimed leader of Buddhism in Mongolia

1641 – 1652: Russians defeat Buryats and win back the control of the area of Lake Baikal

1691: Most Khalks Mongolians accept the Manchu sovereignty and are included in the Chinese Empire (Qing Dynasty, 1644-1911)

1728: the Sino-Russian treaty of Khyakhta redefines the Mongolian borders

1732: end of the independence of Mongolia with the defeat of the Dzungars

25 May 1915: Russia, China and Mongolia sign the treaty of Khyakhta that guarantees the independence of Mongolia

March to June 1920: first steps towards the creation of the Mongolian People’s Party that forges links with the international communist movement

July 1921: the Russian and Mongolian armies drive the White Russians out of Mongolia

11 July 1921: creation of the Provisional Popular Government of Mongolia

14 September 1921: Sukhbaatar, hero of the Revolution, announces the independence of Mongolia

31 May 1924: A Sino-Russian treaty recognises China’s sovereignty on Mongolia

1929 – 1932: confiscation of the feudal goods and abolition of the religious communities

27 November 1934: an agreement between Mongolia and Russia authorises the entry of Soviet troops in Mongolia

1938: closure and destruction of Buddhist monasteries

1939: the Russian and Mongolian troops defeat Japanese in East Mongolia

27 February 1946: signature of the Treaty of Friendship and Mutual Assistance about economic and cultural cooperation between Mongolia and Soviet Union

December 1952: signature of an agreement about economic and cultural cooperation with China

1962: condemnation of the “cult of personality” against Choibalsan

7 March 1989: Soviets announce the withdrawal of the troops

1992: a new constitution is written and communists win another election

1996: against all odds, the democratic coalition defeats the communists in the legislative elections

2000: turnaround: the communists defeat the democrats in the following elections