The Mongolian traditional costume consists of a deel, a hat, boots, and accessories. There are differences between the costumes of the various ethnic groups, but all the deels have the same shape: long sleeves, a wide flap that gets folded up on the chest, buttons on the right shoulder, a high collar, and a fabric belt around the waist.

For men, the deel for work is traditionally made of thick cotton or wool, while the women's deel is more luxurious, with silk prints. Winter deels are covered with sheep or goat skin. The traditional hat can be made of fur, silk, or felt according to its shape. The boots are generally made of leather with a thick felt lining. Many herders make their own deel and boots, and wear them, but more and more Mongolians wear occidental clothes. Nowadays, most city-wellers wear the Mongolian traditional costume only for celebrations like Tsagaan Sar (lunar new year) or for special occasions like graduation ceremony or weddings.

The first known Mongolian costume was the one that Huns wore. It consisted of a deel with a flap on front, pointed boots, and a belt. Turkish people who lived in Central Asia from the 6th to the 10th century used to wear similar clothes, but the deel was closed in the opposite direction. It's only from the 13th century that the Mongolian costume was made more beautiful, with silk instead of leather or wool. The high collar and the flap of the modern deel appeared quite recently, when Manchuria ruled on Mongolia. Beforehand, the front of the deel was closed diagonally, like Mongolian monks still wear it today. 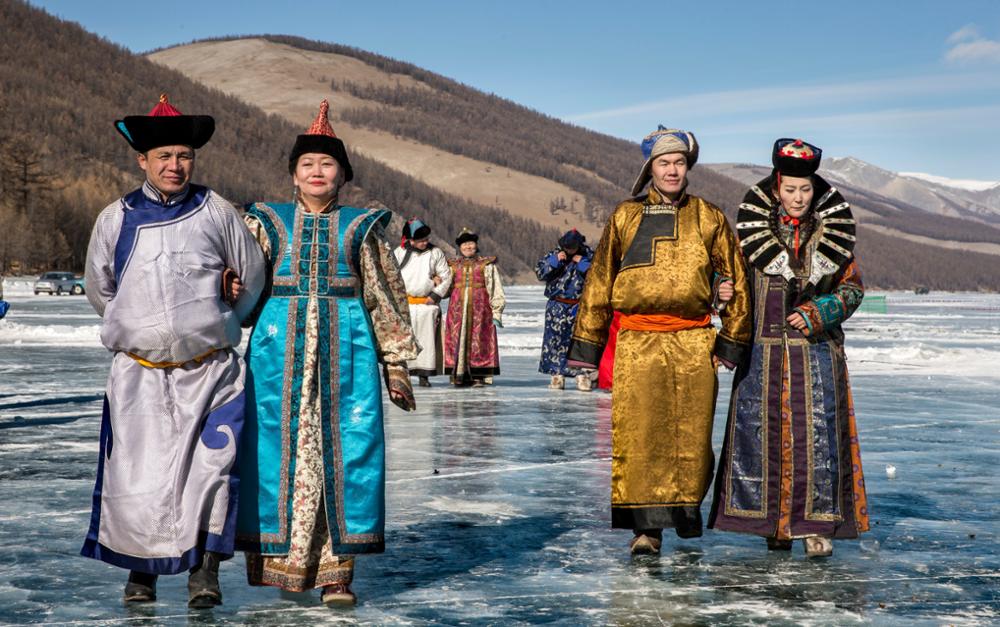 From the beginning of the 20th century, women started to wear a sophisticated and richly decorated deel, with beautiful jewels, to show their social position. For example, the deel of a Khalkh's wife was made with silk and brocade covered with gold or silver. On top of it, she could choose to wear a uuj, or a dress without sleeves of a different colour. Regarding jewels, she used to wear pendants in coral, jade, pearls, or other precious stones, pearls being considered as the most precious material, coral and silver after. Hair were most often flattened and tied in a high veil decorated with silver. After the communist revolution, clothes so richly decorated were declared illegal because they symbolised richness. The women's dresses were made much more simple, and occidental hats and caps replaced Mongolian traditional hats. Men cut their ponytail, and women, for the first time, cut their hair too.