Mongolian traditional games can be divided in two types, according to whether they need simple and easily available materials like stones, batons or bones, or created objects (painted or sculpted objects).

The first ones are related to nature and nomadic way of life. They symbolise a ritual and have very simple rules. The most easy game is probably the one called “ail ger” (family home).

The “alag malkhii”, or “multicoloured turtle”, is probably the game that best symbolises richness in Mongolia. Besides being a real game, it's also supposed to bring luck and prosperity to the family and fertility to the cattle if you play for the new year.

The games of the second category – among which cards, chess, dominoes and jigsaws – are considered as social or artistic activities. They are more sophisticated and need more intellectual faculties.

Games with painted or cut pieces are cards, chess, dominoes, and khorol (a game similar to dominoes that use the twelve animals of zodiac and Buddhist symbols). Traditionally, people used to create themselves the pieces of these games, which was an important part of Mongolian traditional art. Chess are the most popular of these games, and also one of the oldest. Some persons of letters say that chess come from Mongolia.

The Mongolian society also gives a great place to sports, with many competitions of the three “virile sports” - archery, horse race, wrestle -, especially during the Naadam. The skills awaited for these sports are the ones Mongolian men had to have during Mongol Empire. It was important to be a good archer for hunting and for wars. Horse riding was an essential skill during the military campaigns and in the daily life. Wrestle allowed to test strength and rapidity, the most important male skills at that period. 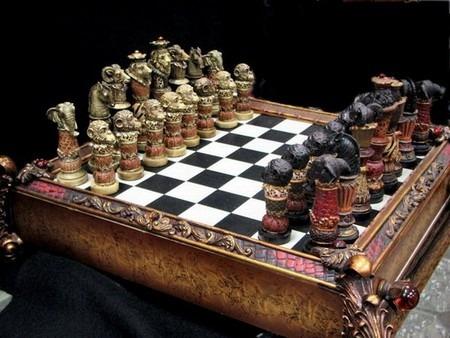 Ail ger: it's a Mongolian traditional game played with stones, a bit similar to the way occidental children play “mummies and daddies” with dolls. They draw a small circle of stones to represent the yurt. Inside it, they place other stones to represent furniture and domestic objects. Stones with different colours and shapes are placed outside the yurt to represent the animals. The game of ail ger has a very important symbolic side and any traveller who comes across such a game should add a stone to symbolise a new animal, which will symbolically increase the size of the cattle and bring good luck.

Shagai: shagai or knucklebones is the most original Mongolian game. It's played with sheep's knucklebones cleaned and polished.

Each one of the four sides of the knucklebone represents a different animal: horse, sheep, camel, and goat. Many games can be played with knucklebones, but the aim is generally to throw and pick them, with different consequences according to which side they fall on.

Besides being a pastime for breeders families, shagai also has an important symbolic value. An important family that owns many animals will gradually get many knucklebones, which symbolises prosperity of the family. In olden times, the families that had get more knucklebones than their need used to choose a good day to go and play the “multicoloured turtle” on top of a mountain; then they used to give the bones as offering to mountain and sky.

Horse race: one of the most common games of Mongolia with shagai.

The multicoloured turtle: this game best symbolises richness in Mongolia. Besides being a real game, this game is also supposed to bring luck and prosperity to the family and fertility to the cattle if you play for the new year.

It's played with a number of bones that correspond to the number of good luck in the Buddhist belief: 81 or 108. The place of the bones symbolises the five elements and colours, and the body of the turtle symbolises cosmos according to Mongolian traditional iconography. The players take the bones from the different parts of the turtle or from the five elements. The gam is finished when all the parts of the turtle are collected. The player who's taken most knucklebones is the winner.

Chess: the most popular of these games, and also one of the oldest. Some persons of letters say that chess come from Mongolia.

The pieces of Mongolian chess represent aristocrats, horses, camels, and other elements related to Mongolian life. They're more similar to occidental chess than to Chinese chess, but there are remarkable differencies in the rules. For example, only the pawn placed outside the queen can move two squares for the first move, and the queen can move only one case when it moves in diagonal direction.